Jurmix is the name for the Lemur-template I developed and use for controlling Cubase (v8.0.20) on iPad in my studio..

With Jurmix I am able able to build a mix much faster, access and controll plugins realy fast and acurate, automate mixes, and A-B my mixes with reference sources.

I’ve been working (and still am) on this project for 2 years , before that I tried Touchosc but this turned out to be to limited for my use. Liine (Lemur) is an open community, with a great forum, where everybody is very helpfull. Also thanks to this I ended up where I am now: I can mix and edit faster on my iPad, (almost) without using the mouse!

Cubase has a lot of features, but regretably also lots of restrictions. My biggest criticism of Steinberg is they finish nothing really. An example is the “generic remote” the heart of remotecotrol in Cubase, lots of (new) functions are missing, some are half-heartedly implemented, plugin control is actually impossible by the way it is implemented. In short there were also some hurdles to take .

Tech info;
Combination of “Mackie control” and “Cubase generic remote” funtions, best of both worlds.
At the moment Jurmix works by using two Mackie Control Mackie control emulations, and a number of “generic remote” pages, including some 14 bits (NRPN, more accurate than normal midi) pages for o.a. EQ. For midi-distribution I use Loopmidi. By using Bome midi translator (in the background) I am able to control Windows functions and Foobar.

You can now use multiple iPads with Lemur/Jurmix. Features are a 32 channel mixer (4x MCU), all other pages and menu’s can be opened at all iPads simultaneously. Below an example with 2 iPads, at the moment the maximum number of iPads you can connect is 8: 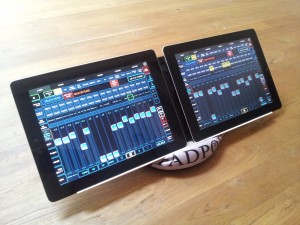 A summary of the “features” of Jurmix:
Jurmix roughly consists of an “outer ring” with shortcuts to popups for commonly used functions, and inside pages with the following functions:
A “ 16 channel mixer ” section, where you control faders, panning, sends on faders and cue sends of 16 channels simultaneously, the “channel name display” is also the “channel select” button. There is a solo state (SIP / PFL / AFL) button here, and using a menu you can select to control solo and mute, rec enable and talkback, automation, VSTi’s, Media, presets etc.
The “selected channel” page has one “overview-page”, and aditional pages to individually control insert, strip, full eq parameters, sends, quickcontrols, instruments, masterfx and mastersection.
“10 dedicated pages” voor ultimate separate control of all above mentioned fuctions.
In the “outer ring” there are buttons and menu’s for: extended transport and click control, inspector, meter, mixer, workspaces, zoom, extended controlroom, an edit-page, and a marker menu.

select “Solo in place, PFL of AFL mode” with just one button.
Lemur/Cubase users; free download of this feature at: Cubase 7 Solo/Listen button

Auto-open and -close plugins while using insert-parameter control via Jurmix.

Choose EQ-type for each band by a menue.

Auto-open and -close the channel-editor while choosing MCU mixer functions.

Always the selected channel in focus and expanded, does NOT scroll offscreen like when using the Cubase equivalent….

Fast switching between Cubase and Foobar, to quickly compare your mix using reference-tracks in Foobar.

Listen button for the “selected channel” that always works , even when the mixer is out of focus (= bug in Cubase). Update: this bug is fixed in Cubase 8.0.20, you can find the generic remote command for “selected channel>listen” in “command> edit>listen”.

Extended Controlroom section for controlling and selecting all connected speakers and headsets in RME-totalmix, my soundcard (big thanks to “softcore”, user on the Liine forum for helping me out on this one).

change into a “touch-strip” on touch, with these you can “zoom” in the arangement and mixer, below de mixer on the left and right side (at the timecode display) there are touch points for quick “channel scroll”.

Windows Control page (starting programs’s and opening and closing folders) is possible with the help of Bome midi translator.